The crescent visibility map below for Dhul Hijjah 1438 shows that moon will be born on 21 August 2017 at 18:30 GMT/UT, but it will not be visible to the naked-eye anywhere in the UK/Morocco region on that date. However, on 22 August 2017 it will be easily visible in most countries of the world. Hence, the month of Dhul Hijjah is most likely to start from 23 August 2017 (so Eid-ul Adha is likely to be on Friday 1 September 2017), InshaAllah. Note that there will be a solar eclipse on 21 August 2017 across North America (and generally it is not possible to see the Hilal on the same evening after a solar eclipse!). See also: Is Eid-ul Adha Connected with Hajj?

When to Observe the Crescent Moon of Dhul Hijjah 1438 AH

Please look for the Hilal of Dhul Hijjah 1438 AH on 22 August 2017 (29th Dhul Qaidah) after sunset from the western horizon as per Sunnah and report your results (positive or negative) via our website Observation Report Form.

Not seen after sunset: On 22 August 2017, ICOUK member Eng Qamar Uddin from York City in the North Yorkshire County (United Kingdom) mentioned that the sky was Totally cloudy, the crescent was not seen by Telescope. 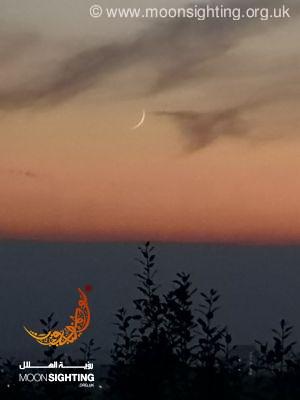 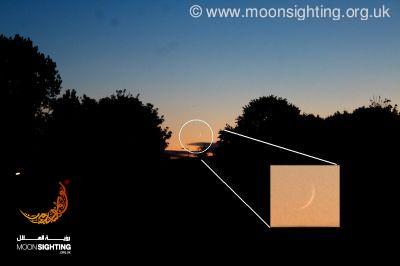